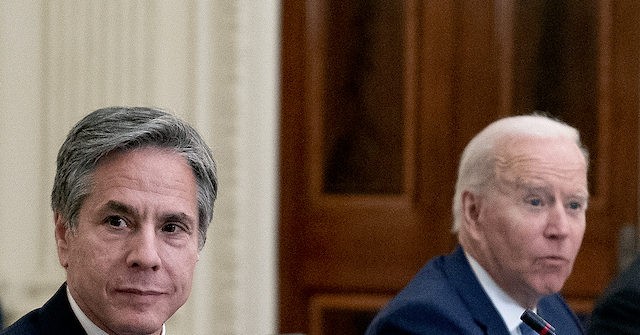 Seventeen Republican lawmakers, led by Republican Study Committee (RSC) Chairman Rep. Jim Banks (R-IN), Sent a second letter to Foreign Secretary Anthony Blinken on Tuesday about a program that would prize grants of up to $500,000 of taxpayer funds “to organizations committed to the practice and propagation of atheism and humanism, specifically in South/Central Asia and the Middle East/North Africa.” Banks Sent the first letter on June 30, which he said went unanswered.

In a statement, Banks said he believes “Biden’s State Department is hiding the extent of his awakened radicalism.”

“Their unapologetic support for atheist groups in Central Asia aligns them with the Chinese Communist Party and violates basic American principles,” the congressman continued. “When Republicans regain the majority, we must stop the radical left from spending American tax dollars on anti-American initiatives.”

In the second letter, the lawmakers restated the twelve questions they had originally asked the State Department to answer about the program. They also noted that many of their constituents have contacted them with concerns about the agency’s promotion, not only of atheism, but also of humanism, “an official belief system — as well as promoting other radical, divisive and destructive cultural policies from the State Department. .”

“Americans deserve to know why the State Department is dedicated to spreading atheism abroad and which foreign, anti-religious groups are receiving their tax dollars,” the lawmakers wrote.

House Republicans also requested a telephone briefing from Deputy Minister for Democracy, Human Rights and Labor Lisa Peterson at the RSC to discuss the grant scheme. But mostly, the lawmakers told the State Department to preserve all documents, records and communications related to the program, in accordance with federal law.

“Specifically, this preservation request should be construed as a directive to preserve all documents, communications, and other information, including electronic information and metadata, that are or may be responsive to a future congressional inquiry, request, investigation, or subpoena ». they wrote.

The lawmakers, in their first letter, blasted the State Department’s program as unconstitutional and noted that “atheism is an integral part of the belief system of Marxism and communism.”

Biden’s State Department is promoting CRT, abortion, and now atheism abroad. This is not what America stands for!

“It is one thing for the Department to be tolerant and respectful of a wide range of belief systems and to encourage governments to respect the religious freedom interests of their citizens,” the lawmakers said in the letter. “It is quite another for the United States government to actively work to empower atheists, humanists, the non-practicing, and the unaffiliated in decision-making. Any such program – for any religiously identifiable group – in the United States would be unconstitutional.”

The State Department characterized atheists as a “unique religious group” while encouraging them to create “networks and advocacy groups” for atheists, according to the letter:

This would be analogous to the State Department’s official promotion of religious freedom “especially for Christians” in China, with the express goal of creating a corresponding missionary network. Obviously, this goal would never pass constitutional muster and would be derided by the radical leftist bureaucrats in your organization as completely off limits. So why this atheist NOFO [Notice of Funding Opportunity] is it not met with a similar objection?

Americans rightly see this as part of your administration’s larger effort to promote radical, progressive orthodoxy abroad. Atheism is an integral part of the belief system of Marxism and Communism.

According to Washington Pavilion, the Biden administration says the grants are meant to encourage “secular religious tolerance.” But Republicans worry that taxpayer funds could be used “to proselytize in favor of atheism or to pressure foreign governments[s] on behalf of the concerns of atheists’.