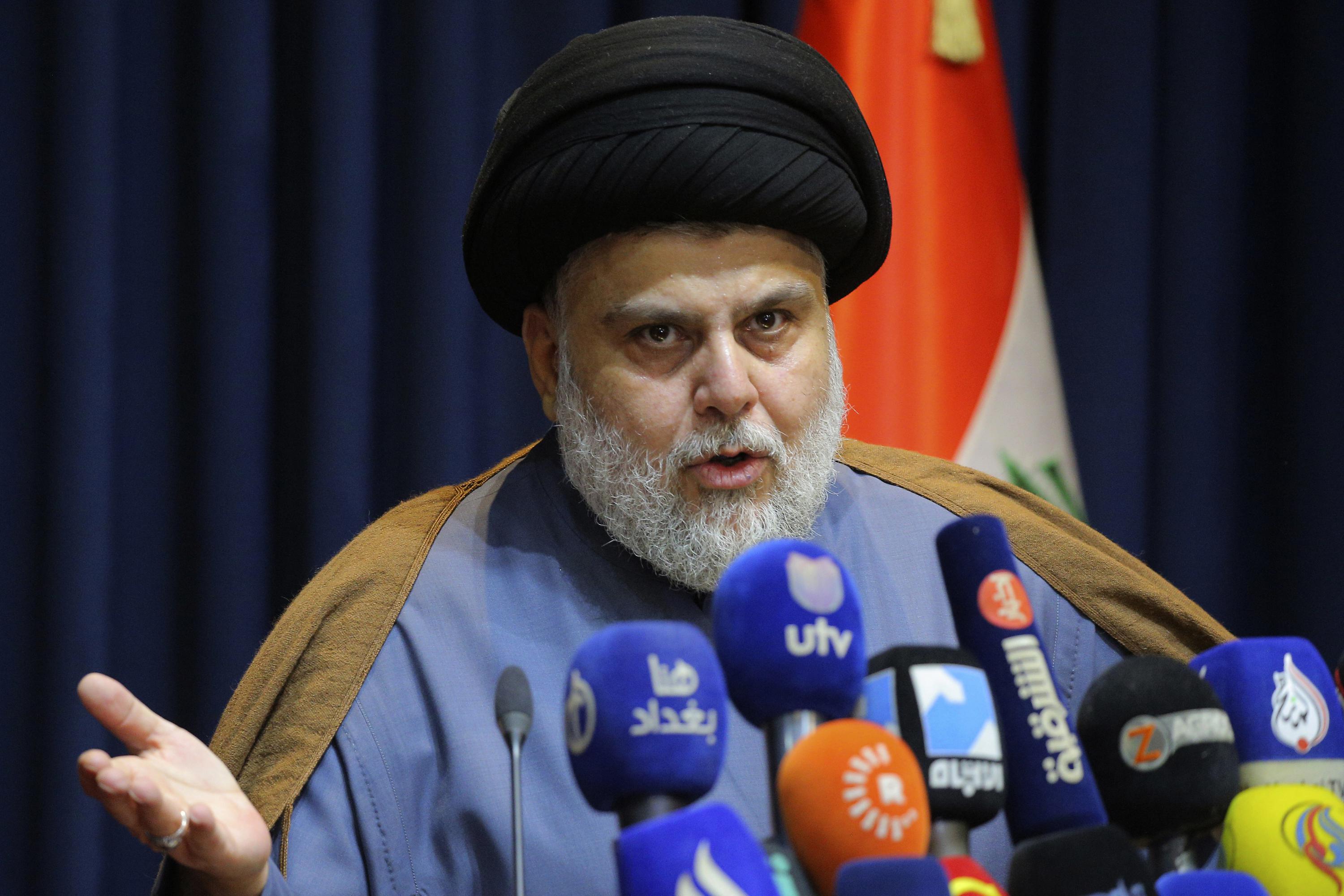 BAGHDAD (AP) — Khalil Ibrahim’s four sons are among thousands of followers of a powerful Shiite cleric staging a sit-in outside Iraq’s parliament after the building was stormed last week in a stunning move that plunged the country into a new era. political instability.

Ibrahim is behind them all the way, he says – as are almost all of his neighbors in Sadr City, the vast Baghdad district of millions of largely impoverished Shiites that is the heartland of support for the cleric, Muqtada al-Sadr.

Every house in the area’s concrete jungle has members participating in the sit-in, 70-year-old Ibrahim told The Associated Press on Thursday. “This time we know there will be change, we are sure of it,” he said.

Al Sadr derives his political weight largely from their seemingly endless support. The cleric’s speech has sparked meticulously organized mass protests at various times in the past, paralyzing Baghdad and disrupting the political process. Many in Sadr City profess their loyalty to the cleric, rejecting allegations of corruption against his movement.

They are drawn to his religious rhetoric and the promise of long-awaited change and recognition for a community that is among Iraq’s poorest.

Most in Sadr City complain of inadequate basic services, including electricity in the scorching summer heat – temperatures soared above 50 degrees Celsius (122 degrees Fahrenheit) on Thursday. The majority who spoke to the AP didn’t finish school, and those who did said they can’t find work.

Spurred on by calls for protest from al-Sadr’s party, they occupied parliament on Saturday before retreating to a sit-in outside the building. Their concentration prevents al-Sadr’s Iranian-backed political opponents from forming a government. Al-Sadr, whose party won the largest number of seats in the most recent elections, demanded a majority government that would have ousted those opponents.

The standoff extends an unprecedented political stalemate 10 months out from federal elections.

The cleric calls his followers to action by evoking a powerful combination of religion, particularly by invoking the sacrifices of Imam Hussain, a revered figure in Shia Islam. It also capitalizes on Sadr City’s long history as a focus of mass social protests where feelings of oppression and revolution run deep.

This history dates back to the establishment of the region immediately after the overthrow of the monarchy in 1958 by Abdel Karim Qassim.

Qassim, then called Revolution City, built settlements for immigrants from southern Iraq, many of whom were forcibly removed from the land and suffered from extreme poverty. Its five initial sectors will grow in the coming decades to 100 sectors with 2.5 million inhabitants.

Promises to develop the region have never been realized throughout Iraq’s troubled modern history.

With successive regime changes, the area fell into neglect and created an urban underclass separated from the rest of Baghdadi society. Under Saddam Hussein, the region became a center of Shiite resistance. After the US-led invasion in 2003, it was renamed Sadr City after al-Sadr’s father.

In a speech on Wednesday, al-Sadr instructed his followers to continue the sit-in and called for early elections, the dissolution of parliament and amendments to the constitution.

In Ibrahim’s household, the requirements are simpler. They want to get a house and get a job. Ibrahim’s sons only have irregular day jobs. Ibrahim’s eldest son is 23 years old and none of his children have passed primary school.

All of them, a total of 12 people, live in a house where the rent absorbs most of their income. And this despite the fact that Ibrahim had worked all his life as a guard outside the Ministry of Education.

Hamida, Ibrahim’s wife, is desperate to get a house of her own.

Just then the power went out. “To go again,” she sighed.

Support for al-Sadr, which stretches across parts of southern Iraq, has shown signs of erosion. Although the party had the largest share of the vote in the October election, its total votes were under one million, less than in previous elections.

The party has participated in many governments over the years, yet Sadr City has seen little improvement. Despite his appearance as a hero of the dispossessed, his party has a vast network of appointed civil servants in all Iraqi state institutions ready to respond. Contractors who do business with ministries under his control have complained of harassment and threats from members of his party.

Critics accuse the cleric of using his followers as pawns, citing the legacy of his father, Mohammed Sadeq al-Sadr, a highly respected Shiite religious figure who was killed by Saddam’s regime in the 1990s.

In Center City, his supporters are rushing to his defense, saying rivals in power have blocked his agenda.

Many said his calls for protest gave them purpose beyond the monotony of their poverty-stricken lives. The protest call is being circulated from Sadr’s party offices to tribal leaders, who are passing it on to their members.

Many protesters who stormed parliament on Saturday said it was their first glimpse of the halls of power, where they are rarely welcome.

“I saw the big buildings, the beautiful rooms, and I thought, ‘How can this exist in the same city where I fight?’ said Mohammed Alaa, a grocer in Sadr City. “Aren’t we human too?”

Portraits of Imam Hussein, the grandson of the Prophet Muhammad, hang outside almost every door in Sadr City. Ashura, the following Monday, commemorates his assassination and Iraqis usually march by the thousands to mark the day in the holy city of Karbala.

Al-Sadr’s messages are filled with references to Hussein’s sacrifice and calls to rise up against oppression. In Saturday’s speech al-Sadr said he was against bloodshed, but “reform only comes through sacrifices” pointing to the imam’s example.

The comparison resonates with his fans. A portrait of Imam Hussain shines in Ibrahim’s modest living room.

“Imam Hussein called for reform and revolution, and now so are our leaders,” Ibrahim said. “Of course, some people can ignore it, but we can’t.”