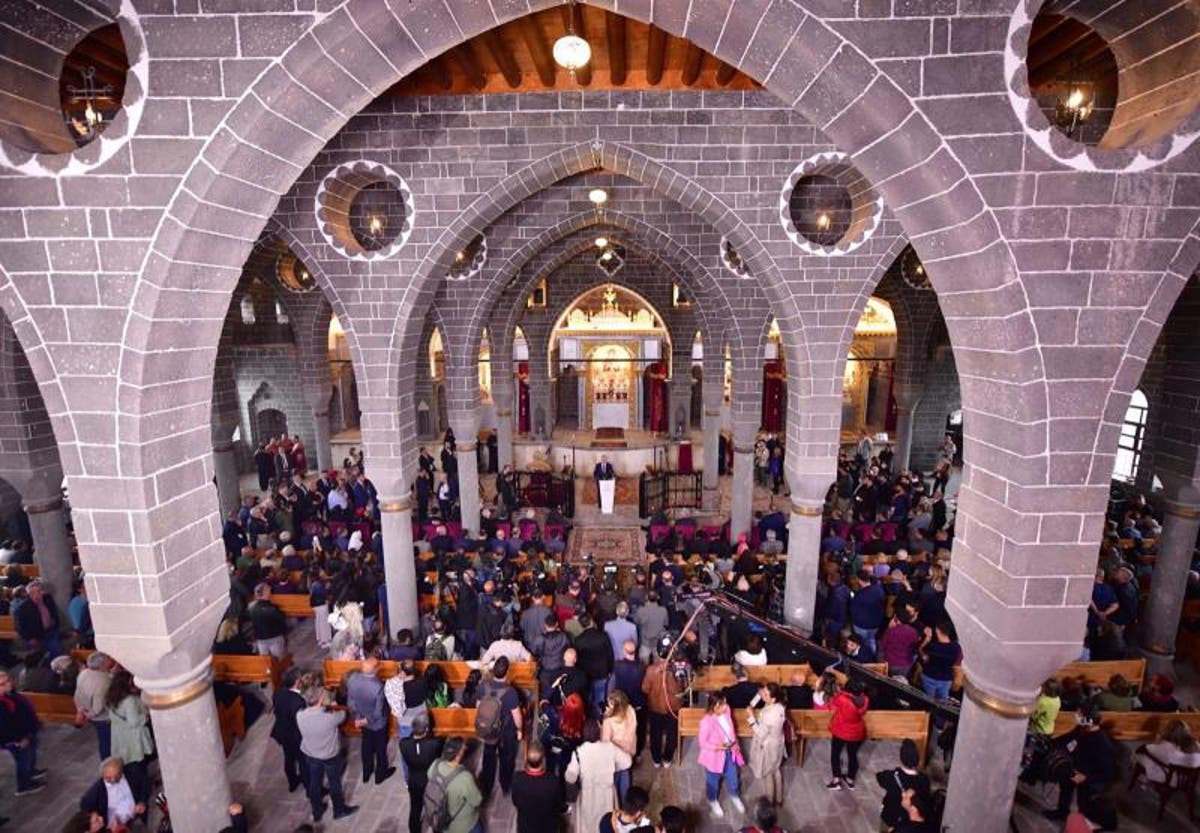 This article first appeared on our partner site, Independent Turkish

The Armenian Church of St. Giragos in Diyarbakir opened its doors after seven years. The historic church just held its first Sunday service in nearly a decade. The Armenian community, inside and outside Turkey, gathered in Diyarbakir in anticipation of the reopening.

The Armenian Church of Saint Giragos in the southeastern city of Diyarbakir was severely damaged during the 2015/16 war, due to the Turkish-Kurdish conflict.

The church of Agios Geragos

The Church of Agios Geragos, which is known as the Church of Surp Geragos in Armenian, was damaged in the clashes. In 2016, the government started rehabilitation.

The church, considered the largest of the Armenian community in the region, was built in the sixteenth century according to some sources. It was destroyed by fire in 1881 and rebuilt in 1883.

German forces used the church as their headquarters in the First World War. The old bell tower of the church was destroyed in 1913 by lightning. It was replaced by a large tower, built for 2000 gold coins in 1914. This was demolished by the state in 1916 because it was taller than the minaret near the church.

Until 1960 the temple was used for various purposes. It was a military warehouse and a textile warehouse for Sümerbank. He was eventually returned to the Armenian community of Diyarbakir.

“We will ask for a clergyman”

Ohannes Gafur Ohanyan, a board member of the church’s foundation, said people were happy with the reopening.

“The project was completed with funding from the Ministry of Environment and Urban Planning. We are excited. We are happy to participate [church] activities again,” he said.

“The church is beautiful”

Gayana Gebortiyan traveled to Diyarbakir from Van to attend the church service.

“I spent my childhood here”

Bülent Mumcu left Diyarbakır in 1963 and moved to Istanbul. He visited to attend the service and meet relatives and acquaintances he had not seen for years.

“I spent my childhood here. Our homes were near the church. There are both painful and beautiful memories. However, this place is very beautiful. We no longer have any reason to return to Diyarbakir. We are not thinking of returning.”

Pakrat Eskutyan, who came from Istanbul, said he made the trip to see the church after it was restored.

He said: “Of course, I am happy about the reopening of the church. But what saddens me is the destruction of the area. The Sur district is on the world heritage list. There is no longer a trace of the old fabric, and I feel the absence of When I came here in 2012, there was a completely different Sur.

“However, we are seeing new buildings being built now. It was a traditional, old neighborhood. The area known as Gavur Mahallesi (non-Muslim quarter) or Xançepek was protected. There is no trace of this plan now. We are sorry for that too.”

Traveling from Germany for the ceremony

An Armenian citizen, Amarson Miros, said he came from Germany for the opening.

Referring to the challenges faced by the Armenian community in recent years, Miros said: “We live as Armenians in Germany. My children study in German. Unfortunately, I don’t speak Armenian. It makes me happy to be in Diyarbakır and witness this beautiful moment. ».

“There are no Crabs in the Gabour Quarter”

Gabris Kabrillion, who was born in Diyarbakir’s Silvan district but was forced to settle in Istanbul, said he was pleased the church was reopened for worship.

“We have suffered a lot here in the past. The area we are in now is known as Gavur Mahallesi (non-Muslim quarter), but there are no Gavur left here. The restoration of the church is good, but it looks far from its original form” , Mr. Kabrillion said.