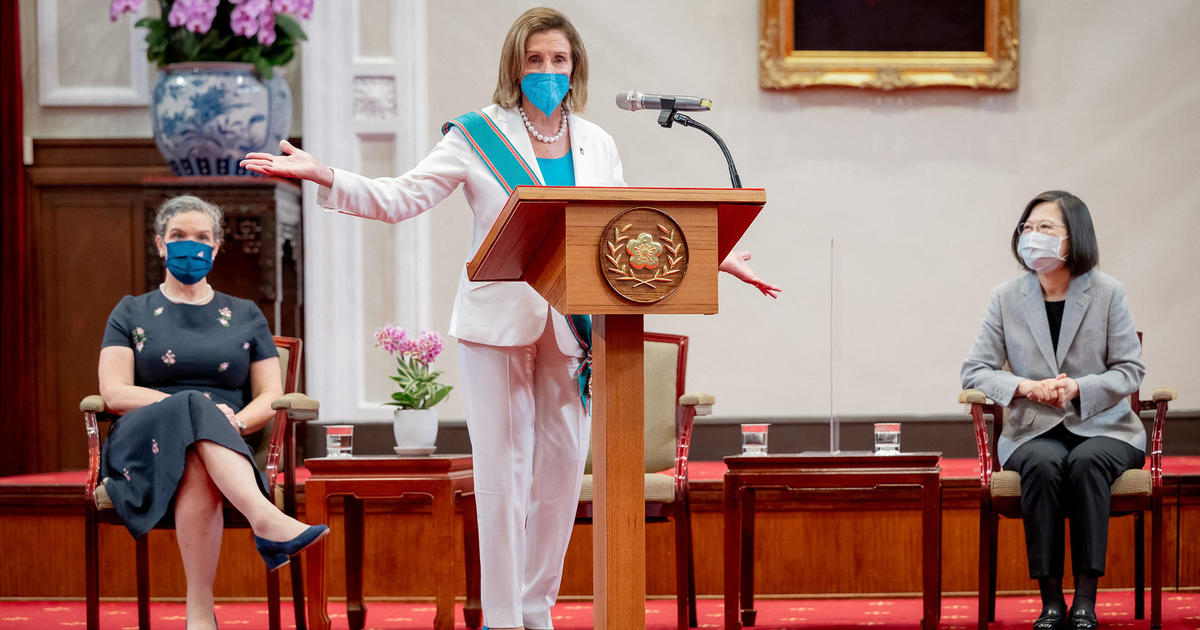 Taipei, Taiwan — U.S. House Speaker Nancy Pelosi left Taiwan after a visit that raised tensions with China, saying Wednesday that she and other members of Congress in her delegation had shown they would not abandon their commitment to the self-ruled island .

Pelosi, the first US speaker to visit the island in more than 25 years, angered Beijing with the visit and set off more than a week of debate after news leaked about whether it was a good idea.

In Taipei she remained calm but defiant.

China, which claims Taiwan as its territory and opposes any involvement of Taiwanese officials with foreign governments, has announced multiple military exercises around the island, parts of which will enter Taiwanese waters, and issued a series of tough statements after the delegation arrived on Tuesday nightin the capital of Taiwan, Taipei.

Beijing portrayed the drills as “necessary and fair”, Agence France-Presse reported. Beijing’s foreign ministry said: “In today’s fight over Pelosi’s visit to Taiwan, the United States is the provocateur, China is the victim.”

The four days of Chinese military drills, including live fire, will begin on Thursday and will be the largest aimed at Taiwan since 1995, when China fired missiles in a large-scale exercise to show its displeasure over a visit by then president of Taiwan Li. Teng-hui in the US

“In the face of deliberately increased military threats, Taiwan will not back down,” Tsai said in her meeting with Pelosi. “We will firmly support our nation’s sovereignty and continue to hold the line of defense for democracy.”

Using live fire in a country’s territorial airspace or waters is dangerous, Wang said, adding that “according to international rules of engagement, this can potentially be considered an act of war.”

Reuters also reported that the Kremlin said on Wednesday that the scale of the escalation initiated by Pelosi “should not be underestimated” and was a “challenge”.

Tsai, thanking Pelosi for her decades of support for Taiwan, presented the speaker with a political honor, the Order of Favorable Clouds.

On Wednesday, China banned some imports from Taiwan, including citrus fruits and fish.

Pelosi addressed Beijing’s threats Wednesday morning, saying she hoped it was clear that while China has blocked Taiwan from participating in some international meetings, “that they understand that they will not stand in the way of people coming to Taiwan as a sign of friendship and support”.

He noted that support for Taiwan is bipartisan in Congress and praised the island’s democracy. He stopped short of saying the US would defend Taiwan militarily, stressing that Congress is “committed to Taiwan’s security so that Taiwan can defend itself more effectively.”

Her focus has always been the same, she said, going back to her 1991 visit to Beijing’s Tiananmen Square, when she and other lawmakers unfurled a small pro-democracy banner two years after a bloody military crackdown on protesters in the square. This visit was also about human rights and dangerous technology transfers to “rogue countries”.

Pelosi visited a human rights museum in Taipei detailing the island’s martial law-era history and met with some of Taiwan’s most prominent rights activists, including an exiled former Hong Kong bookseller who was arrested by Chinese authorities , Lam Wing-kee.

Pelosi, who is leading the trip with five other members of Congress, also met with representatives from Taiwan’s legislature.

The Biden administration has tried to tone down the visitinsisting there is no change to America’s longstanding “one China policy,” which recognizes Beijing but allows informal relations and defense ties with Taipei.

Pelosi said her delegation has “stepped up,” including Gregory Meeks, chairman of the House Foreign Affairs Committee, and Raja Krishnamurthy of the House Intelligence Committee. Also on the mission are representatives Andy Kim and Mark Takano.

He also mentioned Rep. Suzan DelBene, who Pelosi said was instrumental in passing a $280 billion bill aimed at boosting American semiconductor chip manufacturing and research — an industry dominated by Taiwan and vital to modern electronics.