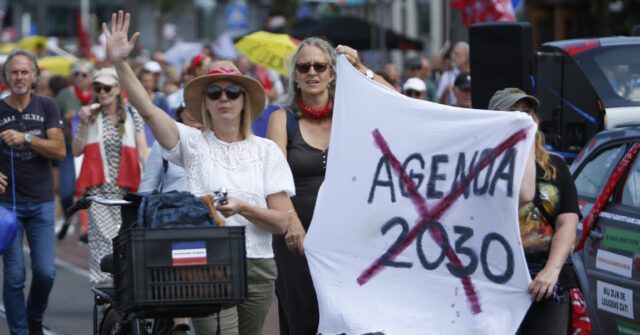 Far-left extremists in the Netherlands have threatened to attack farms in the country owned by “right-wing nationalists”.

The threat from far-left extremists in the Netherlands comes as farmers continue to fight EU green agenda measures in their country that could lead to the closure of up to 30 percent of livestock farms, which local government officials have decided an “inevitable transition” is an integral part of it.

According to a report with Der Telegraafthe extremists threatened to soon take over barns of “far-right nationalists” — also known as farmers trying to protect their livelihoods — in the country and let animals perish from their paddocks.

“From next week we will occupy livestock farms and free animals from large stables,” the publication said in an online statement linked to the extremists, which also took time to denounce the farmers themselves.

“They are right-wing nationalists and comparable to Nazis for animals,” the post said, while calling on netizens to join the so-called “Animal Defense Force.”

“The extreme scum of agriculture must be identified and locked up,” the netizen also reportedly wrote.

The posts prompted a serious response from the farming organization LTO Nederland, which in a statement asked its members to “be vigilant, but also to keep the peace.”

“LTO Nederland is concerned about messages circulating on social media from the extremist corner of animal activists calling for barn occupations,” the group said in a statement released Thursday.

“LTO Nederland takes these types of threatening messages very seriously and calls on its members to remain alert for possible actions,” he continued.

“It is important that farmers know what they can do to prevent incidents of animal extremism, but also how to act in the event of a suspicious situation or an actual break-in,” the statement continued.

The threats to farmers’ livelihoods come amid state efforts to crack down on protesting food producers, with videos released on Monday of Dutch police attacking protesters against the green agenda with batons.

Seemingly incited by an officer pushing a protester, while law enforcement officials appeared to manage to injure some protesters, the clash eventually resulted in the protesters turning on the police, who were then forced into an apparent retreat.

Four people were subsequently reported to have been arrested at the demonstration, while the local mayor of the protest site vowed further action against anti-government activists.

“The police have registered license plates and will continue to take measures against people so that they have a queue under criminal law,” said mayor Arjen Gerritsen. “There were serious disturbances, people committed violence against the police. I don’t tolerate it and then I act together with an excellent team of police officers.”

Despite the local official’s fiery statements, there is little sign that those in the Netherlands protesting the Green Agenda decrees – which are the direct result of measures passed by the European Union – plan to stop any time soon, having previously used manure and burning hay to to block the highways in the country.

Protesters also appear to have strong support in the country, with 4 in 10 saying they actively support the protests, while 71 percent admit they understand farmers’ anger over proposed caps on nitrogen emissions, with gas being a a central component in many basic fertilizers.