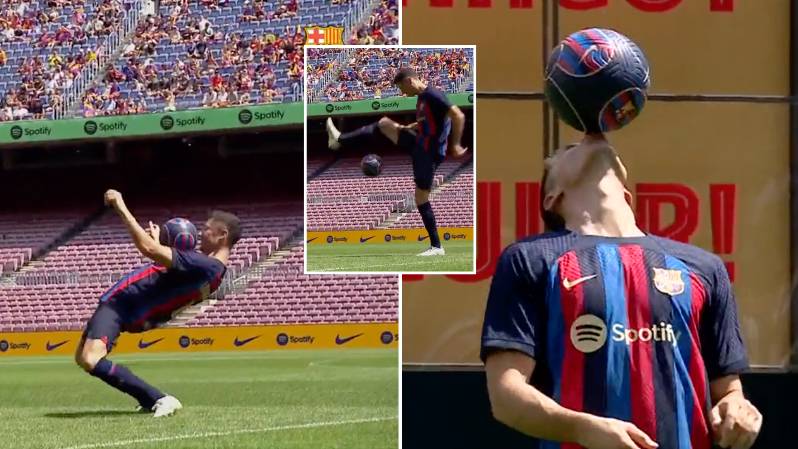 Barcelona forward Robert Lewandowski gave the 59,026 crowd a display of skill to remember during his presentation at the Nou Camp on Friday. We’ve seen them go wrong over the years, but this was impressive. Check it out below.

Last month, after months of speculation, one of the most talked-about transfers of the summer was completed when Lewandowski left Bundesliga champions Bayern Munich for Barcelona.

The 33-year-old has signed a three-year deal with an option to extend for a further 12 months after the Catalan giants splashed out £42.5m on his signature.

On Friday morning he was presented as a Barcelona player at the Nou Camp by president Joan Laporta.

As is traditional at the Catalan club, Lewandowski showed his ability to the crowd with a short skills challenge.

And the striker clearly wanted to make a great first impression. He pulled off a number of moves, including Zlatan’s famous ‘Matrix’ chest control, and was even nicknamed ‘Robert Lewandinho’ by Barcelona’s social media team.

“The emotion was amazing when I saw so many people for my presentation,” Lewandowski said at his press conference.

“I have no words to express my happiness. This was something amazing. I want to show my skills on the pitch and give fans all over the world happiness.”

As mentioned earlier, we’ve seen the good and the bad during these skill challenges over the years.

Back in 2017, after joining from Borussia Dortmund for £97m plus £38m in add-ons, Dembele struggled to pull off a single skill move. Remember this?

Dembele isn’t the only player to crumble as the cameras click away. Martin Braithwaite, Sergino Dest and a number of Real Madrid players, including Marco Asensio, have been sent off after attempting the famous skills challenge.

Thoughts on Lewandowski’s skills in his official presentation on Friday? Will it be a success for Xavi’s side this season?