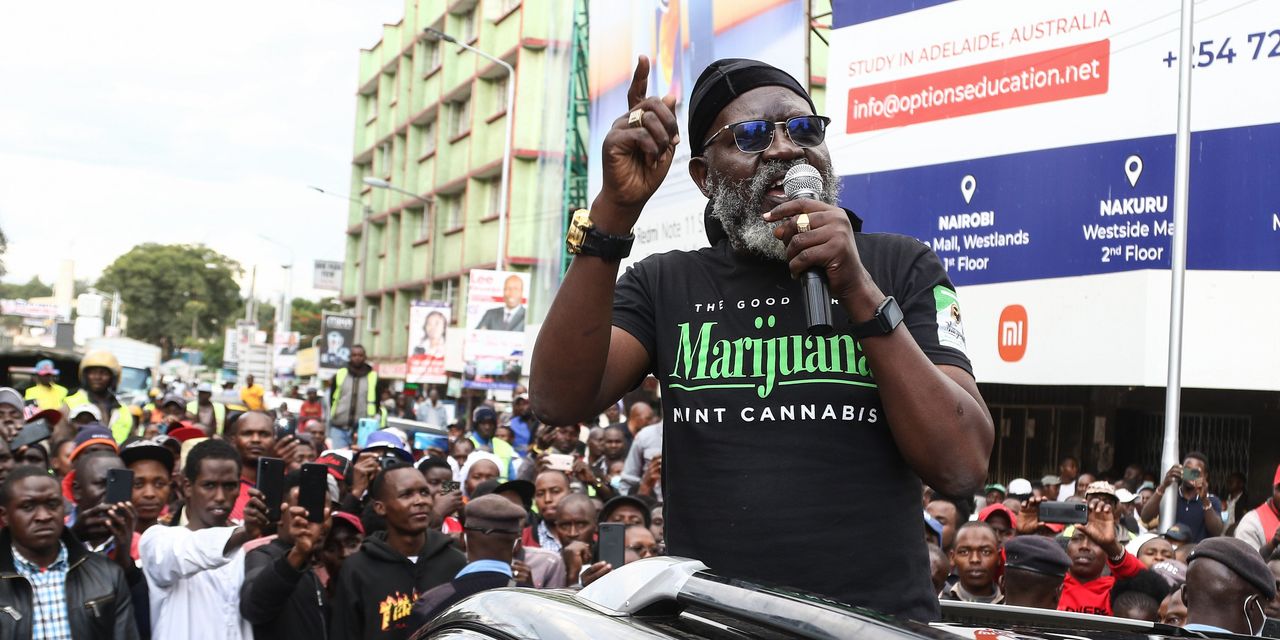 And replace them with marijuana.

In a presidential election where the main candidates are the same old politicians, no one could accuse Professor Wajackoyah of making the same old campaign promises. And even though he’s polling in the low single digits, it might just be high enough to deny the favorites a majority and force a runoff that will roil Kenyan politics for months.

But it’s his plan to legalize marijuana that has caught the attention of Kenya’s underemployed, disaffected youth, who heckle him every time he steps out of the sunroof of his borrowed campaign SUV or stops at a gas station toilet.

Professor Wajackoyah has criticized church leaders for his stance on marijuana, and conservationists for his proposal to kill hyenas and sell their testicles in Asia as a cure for erectile dysfunction.

More than 70% of Kenya’s population is under 35, however, and for many of them Mr Wajackoyah represents welcome and sometimes comic relief from the political cycle that has ruled the country since independence in 1963.

“Every reggae club in the country has my picture in there,” he said during a recent campaign in Garissa, an arid university town in eastern Kenya about 100 miles from the Somali border.

Driving into this East African country in a pot-themed T-shirt, Adidas pants, athletic sandals and his signature doo-rag, the 62-year-old candidate may be gathering enough support to emerge as kingmaker in October’s runoff election.

A series of new polls put him between 1.8% and 2.9% nationally, with none of his main rivals breaking the 50% mark needed to declare an outright victory. In a poll in June it reached 4%.

That could be enough for Prof Wajackoyah’s appeal to spoil the presidential race between two long-time politicians: Deputy President William Ruto, the self-styled champion of working Kenyans, and fifth-term candidate Raila Odinga, who has been endorsed. by outgoing president Uhuru Kenyatta.

Candidates must win a majority of the national vote and meet county voting thresholds to ensure victory and avoid a runoff election in October.

Professor Wajackoyah’s Roots Party platform starts with the legalization of marijuana, which is called bangi in Swahili. Professor Wajackoyah, who says he doesn’t smoke it himself, said if industrial hemp and medicinal marijuana were grown in just one county, it would generate enough revenue that “Kenya could buy Bill Gates and Microsoft in just two years”.

The young men who surrounded his car in Garissa, however, were not imagining industrial hemp when the white-bearded candidate raised his fist and shouted: “Bungi power!”

“We will be high until we die,” said fellow driver Mohamed Shambi, 31. He plans to try to get his parents to vote for Mr Wajackoyah, too.

Prof Wajackoyah said his government would draw up new regulations to discourage people from walking into expressway traffic to collect pot from flower boxes.

Also on his to-do list: Shut down the Chinese-built railway linking the capital to the Indian Ocean port of Mombasa, pay off Kenya’s outstanding debts to China with bags of marijuana and install a Kenyan-built railway.

His campaign manifesto promises to “deport foreign idlers who have taken up jobs in Kenya,” a group he identifies as Chinese workers who came to build Chinese-funded infrastructure projects. Beijing has filled Africa with ports, airports, roads and bridges, a campaign that has often left countries deeply in debt to Chinese state-owned companies.

“In Kenya we are being overwhelmed by the Chinese,” he said.

Zhou Pingjian, Beijing’s ambassador to Nairobi, said less than a fifth of Kenya’s external debt is owed to Chinese creditors and what loans China has made go to valuable infrastructure. “The fruitful and tangible results of our cooperation are solid, there for all to see,” Mr. Zhou wrote in a recent article in Kenyan news agencies.

Professor Wajackoyah grew up tending his father’s cows in the village of Indangalasia in western Kenya. But after his parents divorced and his mother left after a dispute with other villagers, he ended up hitchhiking in Nairobi at the age of 15. He lived on the streets until he was rescued by a Hare Krishna community, the faith he still practices today.

Generous sponsors put him through school, and he ended up getting an undergraduate degree in the UK and a master’s degree in law from the University of Baltimore.

When not campaigning, Prof. Wajackoyah practices law in Nairobi and has been an adjunct professor at the USA International University in Nairobi.

He met his American wife, flight attendant Meller Cheatham, at a departure gate at Philadelphia International Airport in 2010.

She thought him a bit full of himself but was impressed when he said he wanted to be president one day to make a difference in the lives of ordinary Kenyans.

“They’ll love you like everybody else,” Mrs Cheetham assured him as he and his volunteer campaign staff departed in a tiny entourage for Garissa.

Items in his manifesto include exporting dog meat and harvesting snake venom to make antivenin. He predicts that a Kenyan farmer could earn $5,300 for a vial of black mamba venom, a jackpot in a country where the per capita gross domestic product is $2,000.

Tom Molony, a political scientist at the University of Edinburgh who studies elections in Kenya, said many young voters see little hope that their lives will be changed by the top two candidates. “Then there’s Wajackoyah,” said Mr Molony.

Professor Wajackoyah would not say who he would support in a runoff, or what he would demand in return. He said both main candidates have reason to fear Plank 4 in his manifesto, which reads: “Hang the corrupt.”

Kenyan political circles are abuzz with rumors that Mr Odinga’s supporters are giving indirect support to Prof Wajackoyah because they believe he is alienating young voters from Mr Ruto.

Indeed, the police turned out in force to protect Professor Wajackoyah when he arrived in Garissa with a loudspeaker blaring Bob Marley.

Police officers posed with him for selfies as he passed through checkpoints. He spent eight years in Special Branch, Kenya’s secret police, eavesdropping on enemies of former president Daniel arap Moi, who served from 1978 to 2002.

“This is the hand of the government,” an aide to Professor Wajackoyah said of the increased security presence.

Professor Wajackoyah enjoys worship. He proudly points to reports of a woman with a marijuana leaf on her forehead in his honor.

His entourage left Garissa accompanied by a spontaneous herd of hundreds of youths on motorbikes chanting his name and waving his campaign posters.

“A lot of people think I’m crazy,” he said in a campaign speech. “But the Lord God made me so.”